Oregon Fail of Syracuse, NY is the home of one of the Thumbs UPstate Co-Directors Joe Blum. To avoid any conflicts of interest, I asked my twelve year old niece to provide the questions. In a further effort to avoid any conflicts of interest, Joe asked fellow Failure (?) Mike Borden to do answer the questions. One of us annoyed someone unnecessarily.

Q: Oregon Fail, huh? What's that about?
Oregon Fail is a group of five hilarious friends who like to hang out and do longform improv in public places. Sometimes people gather around to laugh at them, but they're ok with that. They like to fail, and fail hard.
Q: Why would I want to watch you instead of a group with better looking people?
Because it's what's on the inside that counts, and we're mostly very tall, so logically we have more guts and "stuff" inside of us. Also, we choose a charity for every show and donate all of our profits to them. So you can come to one of our shows and tell all your friends that you spent Friday night "being philanthropic". Your secret is safe with us.
Q: So, like, what's the worst thing that's ever happened to you on stage?
Joe almost got decapitated once when his pod malfunctioned during a show in Milwaukee. Wait, that was "This Is Spinal Tap"...
Q: How do you guys do improv?
We do a few traditional longform structures like the Harold and La Ronde and add our own twist. We also have a structure called Texts from Last night that we sort of invented and are mostly pretty good at. 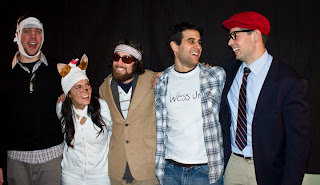