This is the  567th in a twenty part series highlighting the improv teams performing in the 2013 Festival. Keep checking here or follow us on Facebook or Twitter to learn all about our intrepid performers. 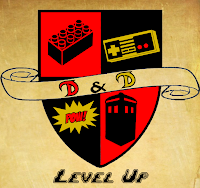 We are two different guys coming from two different nerdy origins…Derrick is well rounded in D&D, Comics, and Role Playing whereas Dan knows much in the realm of Video Games, specifically Nintendo. With both of us combined, interesting formats, references, and ideas are created.

Do you know what games / forms you plan on doing for the festival?
We have 2 different forms that we could do depending on how long of a set we get..one i.es entitled "Scene Genie" in which it is a "stream of consciousness" kind of scene flurries… while the other is an Adventure Story Arch that carries over attributes from each performance.
How long has your team been working together?
Dan and Derrick have been working together for about two years doing improv, on Harold teams, and in Flower City Improv… so we decided to create this twoprov based on the nerdy things we love.

What life lessons do you think there are to be learned from improv?
It's almost a form of therapy if you think about it.. it's the base cornerstone of drama therapy. Through different scenes and scenarios more is revealed about each other.

D&D will perform Saturday, April 6 at the Thumbs UPstate Improv Festival. Like them on Facebook.
Posted by Mike I. at 5:34 PM