This is the first in a twenty part series (twenty parts... holy crap) highlighting the improv teams performing in the 2013 Festival. Keep checking here or follow us on Facebook or Twitter to learn all about our intrepid performers. 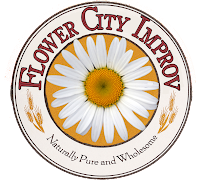 We're a rag-tag group of individuals that enjoy comedy and laughing. We didn't see any other troupes in Rochester that offered free improv and lessons when we were formed so we decided to create our own.
Our team is comprised of both improv veterans who take it seriously and those who are looking to try something new and have fun!

Do you know what games / forms you plan on doing for the festival?
We plan on doing some short form games. Haven't nailed down completely which ones yet.

What life lessons do you think there are to be learned from improv?
Honestly, you can learn a lot about people. Just by learning the different relationships between one another, as well as being able to "check in" and benefiting from communicating with one another in a scene. I've also learned patience, and that comedy can come naturally.

Dan, co-founder of Rochester's Flower City Improv was nice enough to answer some of our lame questions. FCI will perform on Saturday, April 6 at the Thumbs UPstate Improv Festival. Like them on Facebook.
Posted by Mike I. at 4:07 PM