Make it stop. Make the litany of profiles stop. 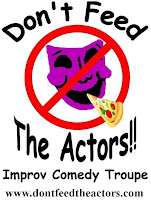 DFtA was founded by mostly Syracuse area community theater actors.  Since its initial beginnings we have had a large group ranging anywhere from 10-14 area actors.  Our large size has also allowed us to keep up a very active schedule as we bring 5 actors to every gig while also keeping it fresh.  Our focus is on short form improv and audience participation.  We strive to have shout outs, written suggestions, or direct audience participation in every game and we have altered many traditional short form games to achieve that.  It also makes it easier for preparation for each gig since we are lazy and don't like to think ahead.


What games will you bring?
We have a couple of musical games in mind as well as some audience participation games and some guessing games, some shout out games, perhaps some games about the meaning of life, but probably not.
How long have you been working together?

DFtA has been together actively performing since January of 2008.  We have entered our sixth year of improv with the core group adding new members along the way as others have, well, disappeared*.  We are Syracuse's longest running semi-pro improv team*, which sounds impressive until you realize that many newts live beyond that, unless they get better.

What life lessons can one learn form improv?
Of course most people will go with accepting of new ideas, learning to work together as a group, listening to and trusting others.  And those are all great lessons.  However what we really have learned is much like our dating appeal, our comedy appeal is much better when your drunk.  So drink...drink a lot.

*Editor's Note: Do not inquire as to the whereabouts of past members.

Don't Feed the Actors doesn't so much come to the Festival on Saturday, April 6, as emerge from the backroom. We are, after all, in their house. Check them out on the interwebs, on Facebook, and on YouTube.
Posted by Mike I. at 3:02 PM