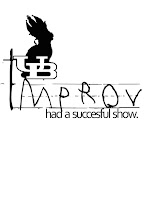 Oh, profiles, I wish I could quit you. UBImprov's Miscellaneous Imports is making the trek east to RIT's Improvamonium this Friday.  We at Thumbs UP thought this earned them the Thumbs UP Profile treatment.  I reached out to Chris Salmin, incoming President of UB Improv, for answers to the following pressing questions.


1) Do you do short form or long form improv? Do you have any favorite forms or games?


The Miscellaneous Imports do both long and short from improv. We prefer a long form we’ve dubbed Montage. Basically, it is a series of unrelated scenes based on a single prompt (which ideally it returns to at the end) that usually involves sweeps, edits, tap outs, etc. It is usually played at the end of the show, after a series of short form games, so that we can incorporate as many call backs as possible. We like plenty of short form as well.
2) How long has your group been around? What prompted the group to form? 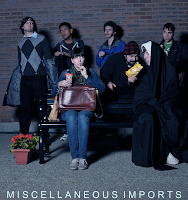 The Imports have been around since September of 2009, and have added and reduced members since then with a solid 5 or so person core. The Miscellaneous Imports formed out of the shell of the University at Buffalo's previous year's troupe, The Laughing Stock, which disbanded in May of 2009 when several of the members went their separate ways, and those who remained attempted to form another troupe at the school. I showed up at Buffalo that August and in less than a month (I had been quite eager to find a college troupe to join straight out of high school) we had formed a troupe and eventually a temporary club. By the time we became a permanent club in April at UB, the Miscellaneous Imports had a few shows under their belts and were quickly gaining interests of fans and would be improvisers.
3) Any stories of shows or scenes gone horribly wrong?


Ha, we’ve had a few traumatic experiences. Don Gervasi of the Eclectic Improv Company, who currently is our troupe director, has many times reiterated the 80/20 rule. Which stipulates 80% of the time, you'll do good improv, 20% of the time, you won't, to put it nicely. That's pretty much stayed true for us more or less. Some of our shows have been totally embarrassing failures, sometimes due to us, sometimes due to the performance area, sometimes due to the audience. We've filled up rooms all over campus, but for some reason, when it comes to the Student Union Theater on campus, with its full size performing stage and 350 seat capacity, each experience we have is worse than the last in that place. We just recently opened up for a touring Upright Citizens Brigade troupe there, and it was easily one of the worst shows I had ever been in; we were actually heckled for the first time in, well, ever actually now that I think about it. The mysterious thing is, I really don't know why it is that room. The night before, BJ Novak of The Office came to the school to perform stand up, requested we open for him, and everything went off almost perfectly in front of 3,500 people packed into a gymnasium. But somehow the classic theater/improv setting of the SU Theater just seems to bring out the worst out in the Miscellaneous Imports, and I assure you, it is brutal.
4) You're a college team. It seems unlikely that any of you have any meaningful memories of the Bills losing four consecutive Super Bowls. Do people still talk about that there? (FYI: The rest of the state still talks about it a lot. It was pretty funny)
Well as for the Bills, only a couple of the members of the troupe are actually from Buffalo, and I might be the most interested in football of us, and I’m by no means a dedicated fan. As for everyone else here in Buffalo, OH yeah, misery is kind of a motif of the city, which I at first sort of despised (being from Rochester it’s a sort of contest as to what city is in a sadder state, which I’m pretty sure Buffalo is “winning”) but I’ve since changed my view. Western New York catches a lot of flak from all kinds of different directions, especially sports, and yet they make it work. From an improvising standpoint, nothing is harder to do than get people energized, interested, and having a good time when your performance has very little momentum. And since the performers and audience feed each other energy much of the time, this can be quite a bleak sight. Now the Bills on the other hand, and some other beloved teams of the city as well, have drudged along, season after season, with no remarkable doings, even crushingly agonizing defeats and yet they still have quite a few die hard, loyal fans that keep them going through the worst of it. And yes, they do still talk about losing 4 super bowls in a row, almost with a sense of pride. I think my Human Resources teacher said it best when referring to this past years Bill’s season, “Nobody can lose as creatively as Buffalo.”

5) Any words of wisdom that you've learned from doing improv that you can share with the class?
Yes, I do actually do have some words of wisdom for anyone who cares to listen. First, always have fun. If you not enjoying yourself, something is very wrong…especially if you’re doing improv. Second, for the eager improvisers: Trust your team, always have each other’s back, and for the     love of all that which you hold sacred, when it comes to a scene that you or your troupe-mates are playing, pay severe attention to EVERYTHING. Can’t really emphasize that one enough, but all caps will have to do [Editor's note: we have more powerful emphasis tools at our disposal]. Finally, one of my favorite quotes for improv and life at large:


The Miscellaneous Imports from UB Improv perform at Improvamonium 3 on Friday, April 15 at RIT. Check them out at www.ubimprov.org and on Facebook.
Posted by Mike I. at 2:53 PM